Disclosure: Mofolinux.com is a participant in the Amazon Services LLC Associates Program, an affiliate advertising program such that this site earns advertising fees by linking to Amazon.com. If you make a qualifying purchase after clicking a link on this website, the associate affiliated with this site may earn a comission at no cost to you.

MOFO Linux is an operating system optimized for defeating all methods of internet censorship and surveillance used by governments, corporations, schools, and internet service providers. It is a tool created to empower people for exercising their unalienable rights to privacy, freedom of expression, association, and peaceful assembly. These are Creator endowed rights, not priveleges to be metered out at the whims of any government, and protected by the International Covenant on Civil and Political Rights and the Universal Declaration of Human Rights. The mission of MOFO Linux is to unblock everything, clearing the way for you to read, write, watch, listen to, debate, or collaborate without interference from Big Brother. 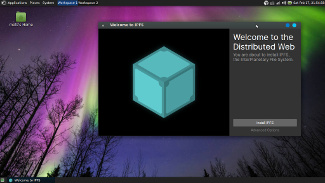 
MOFO Linux is designed for easy usage on home PCs, laptops, and computers installed in internet cafes around the world. It is built upon an Ubuntu GNU/Linux base, but strongly debloated and tuned for speed. The system has office, multimedia, and internet applications enabling web browsing, productivity, networking, and entertainment. This is not simply Ubuntu with a few crypto apps installed; rather, it is a hardened system tweaked for ruthless circumvention of surveillance and censorship.

MOFO Linux contains Encrypted DNS, OpenVPN, Softether, Tor, Freenet, and I2P, and other software tools which provide anonymous and / or secure access to the internet and circumvention of state censorship restrictions. The system is designed to run from a bootable USB stick or "frugal install" on a hard drive or SSD. It also runs great in a virtual machine. Browsing history and usage tracks are destroyed on shutdown. For persistence, set up MOFO Linux with an extra casper-rw partition wich will contain user files and system changes.

MOFO Linux is configured with one default user account (mofo), with the ability to execute commands as root. There are no passwords in the default MOFO Linux distro. You may create your own password, if desired, but it is not necessary for typical usage. VPN managers may require SSH key creation to set up remote servers. Keys and documents created on the system should be backed up on external storage for later use, if desired.

Psiphon is a circumvention system effective against sophisticated state censorship stystems. Access psiphon in the internet application menu, and click to bring up the controller. Select "start" or "stop" as necessary, and the controller will handle the configuration process.

To use an Open VPN service with MOFO Linux, follow these steps:

Softether is capable of fast broadband data transfers, uses strong encryption, but is highly targeted by censorship authorities. Client software for Linux is still sparse, but MOFO Linux includes the official client plus a Softether Controller application which will partially automate the connection process.

WireGuard is the newest VPN added to MOFO Linux, described by its developers as lean, fast, and simple. It is also cryptographically effective and sound. Multiple encryption protocols are built in, and WireGuard is respected by professional in the industry. As with OpenVPN and SoftEther, you can set up your own server or use a commercial service offering the protocol.

Streisand, humorously, gets its name from the "Streisand effect," where attempts to attempts to supress attention to a sensitive actually draws more attention. The circumvention system gets its strength from easily enabling users to set up, manage, and take down their own VPN servers in a matter of minutes, with many different protocols available.

Outline is a system created by the people at Jigsaw, applying new technology to make a safer world. Users set up their own servers in minutes, configured with VPNs based on shadowsocks tunnels.

Algo is "a VPN that works" as described by its developers. As with Streisand and outline, Algo handles the rapid creation and management of VPN servers. Algo focuses narrowly on IPSEC and WireGuard protocols, asserting that those two are most effective against present day threats.

Tor is the oldest and most well developed anonymous network, with extensive infrastructure providing strong anonymity to internet users. I2P is a newer robust privacy and anonymity network. It contains quite a lot of content and services for its users, all resistant to surveillance and censorship. Freenet is an active, decentralised anonymous network designed such that it is impossible to censor and extremely resistant to surveillance. These networks contain internally reachable anonymized websites, chat areas, forums, markets, and exit nodes to the open internet.

For anonymous web browsing, use the "Tor Browser" application, found in the internet application menu. The Tor Browser and OnionShare applications are fully configured for routing through Tor. If you are in China or other countries which block encryption, use the Tor bridges to defeat the blockage. Meek-Azure and Obfs4 are most effective. Tor, with Obfs4 or Scramblesuit, may also be run separately using the "Tor Controller" application. Use the same application to shut down Tor and reconfigure Firefox for normal browsing.

For I2P, use the "I2P Controller" application, found in the internet application menu. Use the same application to shut down I2P and reconfigure Firefox for normal browsing.

In MOFO Linux, Freenet is configured to install freshly from its java package. Use the "Freenet Installer" application to set it up for the first time. To stop or restart Freenet, use the buttons within its main browser page.

The Interplanetary File System is technology providing a robust, decentralised internet based on content of files instead of where they are located, similar to BitTorrent - but better. Applications and data on IPFS are permanent and distributed - with no single point of failure or vulnerability to censorship. Media files, databases, websites, archives on IPFS can exist with resilliance and be accessed with high speed. IPFS-Desktop is the application to use for managing files in IPFS or setting up a local IPFS node. Because MOFO Linux does not have persistence, you must back up your IPFS files configs, and credentials on external media before shutting down MOFO Linux.

Veracrypt is the top multi-platform software for VERY STRONG file system encryption forked from Truecrypt. It has great features and performance - able to encrypt drives and directories, even hiding them from detection. It is compatible with Linux, Windows and Mac systems, so encrypted files may be created or accessed on just about any computer.

Ecryptfs is an encrypted filesystem with support built into the Linux Kernel. It is fast, strong, and efficient enough to keep users' files safe from unwanted access. Use it to encrypt folders or whole drives which will hold sensitive data. Ecryptfs is the principal means of encrypting the home directory and other storage volumes in Linux.

It is suggested that users run MOFO Linux from a bootable flash drive and keep a separate flashdrive partition for encrypted files. Another option is to use a separate drive and encrypt its entire contents, accessing it through Veracrypt. Doing that, it is possible to carry a large volume of data which is quite difficult to detect and even more difficult to decrypt. In theory, a well-arranged encrypted volume should be secure for centuries. Be careful to create strong passwords. Do not allow any secret keys to be compromised. Use Bleachbit to wipe free space on your storage media.

Element is a decentralised and encrypted instant messaging platform, enabling people to connect and collaborate securely over voice, text, and video.

Telegram is a cloud based private messaging service supporting one on one or group communications.

Kodi Media Center provides access to thousands of high quality video and audio streams from around the world. Multimedia apps may be enhanced by PulseEffects for systemwide audio equalization, compression, and limiting for extra punch in home theater / office presentation environments.

Radio stations around the world are available for direct, off the air listening via hundreds of software defined radio (SDR) servers. Firefox contains a bookmarked list of top SDR servers around the world. They are like a "radio in your web browser" for tuning in news, music, political, and religious content on an unlimited global scale. Also, the VLC Media Player can stream podcasts, internet radio, and video from around the world.

MOFO Linux defaults to English on startup, with ability to change the system to Chinese or Arabic in the Settings application. Multilanguage keyboard input is always available. To change the system language, select it in "Language support", then LOG OUT and LOG BACK IN without turning off the computer. The new language will then be activated. Language support in Firefox may be managed by using the Tools -> Addons -> Languages menu.

MOFO Linux wishes to acknowledge and thank the developers creating Ubuntu Linux, the base system upon which MOFO Linux is built. Ubuntu provides incredibly smooth operation, fast perfomance, and a pleasant user interface quite suitable for building customized systems. The developers of the many cryptographic / VPN systems used by MOFO Linux get a nod too! Without OpenVPN, Tor, RSA, SSL, Shadowsocks, and other technologies, the world would be a much less free and more dangerous place.

INTEGRITY AND AUTHENTICITY OF MOFO LINUX

Great effort goes into making MOFO Linux safe and free of malware. To verify that your copy of the iso image file is authentic, undamaged, and unaltered, check the sha256sum against the official authentication document and verify the digital signature of MOFO Linux. The authentication document is available by the download link at MOFO Linux.com. Use the "Passwords and Keys" or equivalent application to check the signature. Import the MOFO Linux public key from pool.sks-keyservers.net or keyserver.ubuntu.com.

MOFO Linux is provided as-is. No guarantees or warranties are applicable to MOFO Linux. Much of the software is beta, may be subject to countermeasures, or blocked by adversarial internet providers. Use of software in MOFO Linux is solely at the user's own discretion and risk. Users are responsible for content accessed. MOFO Linux is not endorsed by or affiliated with Ubuntu / Canonical / Debian GNU/Linux.


INTEGRATED CHANGES FOR THIS VERSION OF MOFO LINUX